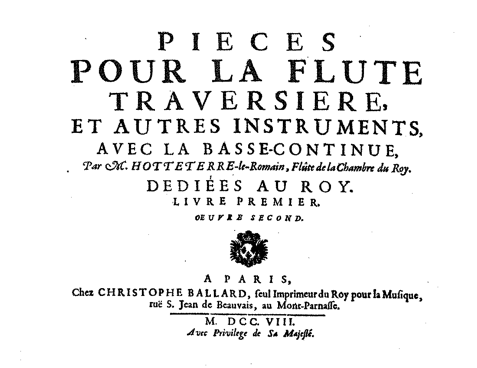 A beautiful collection of pieces for flute (or oboe, violin, etc.)  and accompaniment (basso continuo).

In the intro Hotteterre writes that he has added the most essential ornaments as far as possible and that the ideas in these pieces and his explanation can also be used for other pieces for the flute.

The flattement should be added on nearly all 'long notes' (the flattement is a finger vibrato and is explained in more detail in his Principes de la Flute from 1707).
The speed of the tremblement (trill), battement (mordent) and flattement should be changed depending on the meter and character of the music.
The coulement can be used in every descending third (see first bar below). It is an unaccented note between the two notes, so between B and G you add a small A.

The trill can be used on all notes with an added sharp, unless they are very short. If the melody goes one step up after a trill you can use a double cadence (see left).

The port de voix (lower note appoggiatura, final example below) should almost always be followed by a battement (repeated) mordent)). The placement of this port de voix has been notated by Hotteterre in the pieces, so by going through them all you experientially learn where they should be used.

The accent could be added to any two notes as on the left (dotted quarter note + eighth, when they are the same note), performed at the very end of the dotted quarter.

More details about the performance of these ornaments on the flute (and some details on the recorder and oboe) can be found in his Principes de la Flute.

An incredibly cute aspect, which Isaac Alonso de Molina just pointed out to me, is that the line with the ornaments can also be played as one entire melody from left to right!!!