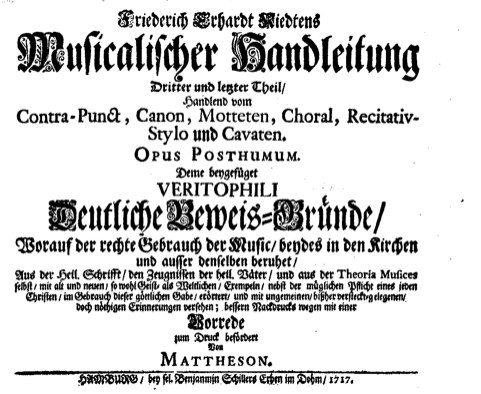 This 3-part manual is a comprehensive (if typically lengthly worded) manual for the many improvisation types of the German Baroque.

One of the ideas that we found interesting is that one bass could yield a 100 different pieces, by way of restructuring meter, rhythmical values and tempo.

There is a translation which was published in 1989 by OUP, but it seems like this edition is currently unavailable.

The translation's description:
"The first volume, a treatise on thorough-bass, was published in 1700 and attracted the attention of J.S.Bach who apparently modelled his teaching on it. The second volume, 1706, revised and edited in 1721 by the music theorist Johann Mattheson, is on variation and includes a chaconne and two complete suites as models, as well as a dictionary of musical terms, one of the earliest in the 18th century. The third volume, assembled by Mattheson and published in 1721, discusses counterpoint, canon, motets, chorales, recitative style and cantatas. These volumes, here presented in one volume with an introduction and explanatory notes by Professor Poulin, provide insights into the music, theory and practice of the early 18th century. "