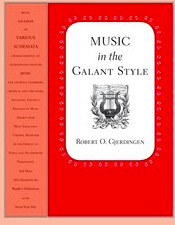 Music in the Galant Style

Although this is not directly an improvisation book, it gives the basic schemata that are used in the 18th century (and many can be found before and after).

Schemata are basically building blocks, little bits of music which in skeletal form can be used to compose or improvise larger works.

Music in the Galant Style is an authoritative and readily understandable study of the core compositional style of the eighteenth century. Gjerdingen adopts a unique approach, based on a massive but little-known corpus of pedagogical workbooks used by the most influential teachers of the century, the Italian partimenti. He has brought this vital repository of compositional methods into confrontation with a set of schemata distilled from an enormous body of eighteenth-century music, much of it known only to specialists, formative of the "galant style."

/Part I - Children in Need
2. Little Boys on Their Own
3. Masters Take Up the Challenge
4. Child Labor
5. Institutionalized Apprenticeship
6. Social Class

/Part II - Technologies of Training
7. Schemas and Exemplars
8.Solfeggi and the Acquisition of Style
9.Partimenti and the Power of Improvisation
10. Counterpoint and Collocation
11. Intavolature and the Techniques of Instruments.
12. Dispositions and the Mastery of Complexity

Part III - Trial by Contest
13. Little Masters, Real Masters, and Masterpieces
14. The Contest Piece as a Probe of Memory
15. Affordance and the Musical Habitus
16. Predicting Creativity Within a Tradition
17. A Sickly Young Woman Speaks Elegant Harmony

Appendix A: For Further Study
Appendix B: Movimenti, Schemas, and Exemplars
Index of Names

Music in the Galant Style 0 reviews

Music in the Galant Style 0 reviews