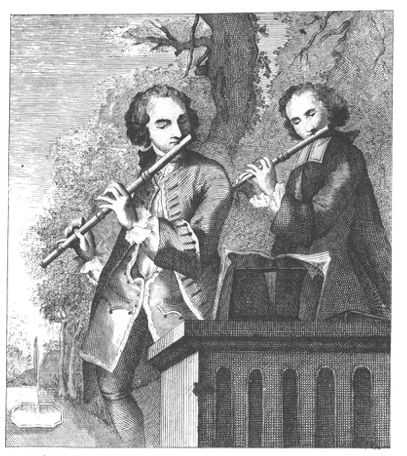 In this treatise there are many ideas related to improvisation. First and foremost there is a small chapter on how to improvise preludes, with several example preludes. Earlier on there are several preludes to practice certain intervals. Beside this there are suggestions about modulation, transposing (p 49)
There are also many instructions on the prevailing ornaments. All can be found below.

The art of preluding

The prelude is a type of Caprice which is composed on the spot before playing a piece. One could also play a few measures of the beginning of the piece.
To prelude well, one should know whether the following piece is in the major or minor mode and prelude in the same key.

If you are playing by yourself without accompaniment, you can play a 'grand prelude'.
For these longer preludes one can modulate to any key you want, use faster and slower passages, with melodies by step or with jumps, whatever presents itself to the imagination. 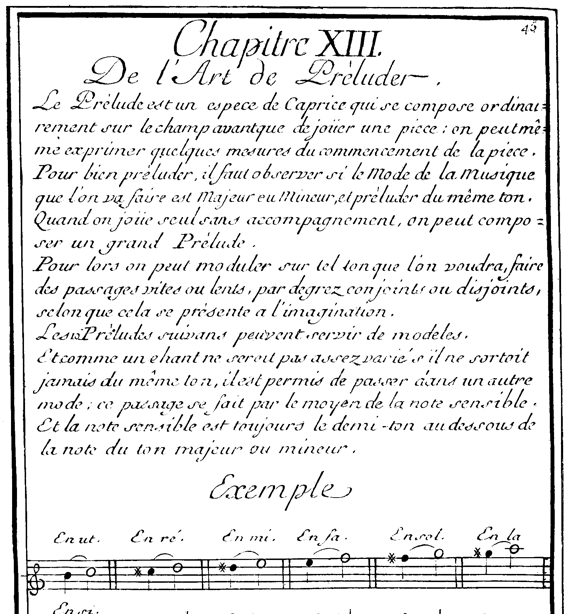 After an explanation of intervals he gives a model prelude and shows how one can transpose or flesh these out.

Compared to his violin treatise "L'ecole d'orfee", the description is more detailed here. The trill should be started on the upper note with a T from the tongue, start slower and become faster, without changing the breath. 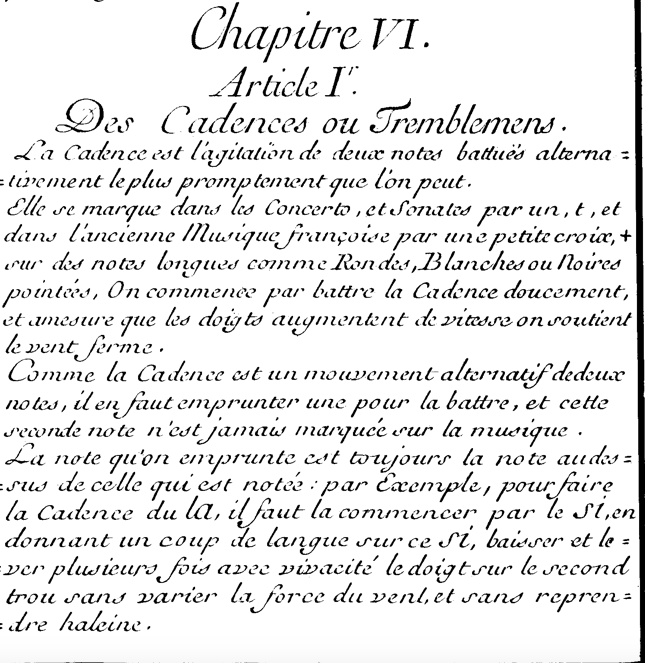 The double cadence is a trill with two fast notes at the end to go into the next note. It is done most often on longer notes which go up stepwise. 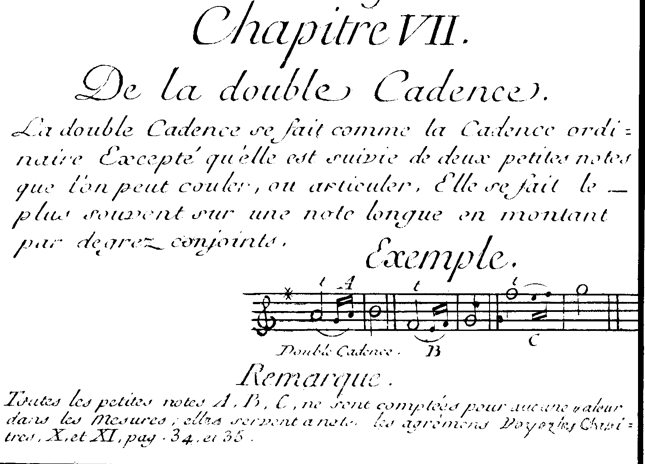 Then a table follows with all the fingerings for the different trills.

Then there is a discussion of the Flattement, or finger vibrato. Make sure never to actually hit a tone hole, but always caress the air or stay a bit under or above the tone hole.

Flattement is used to enlarge and diminish the tone. It is especially touching in tendre movements on long notes. Sometimes it is marked in the score with a squiggly line (as you can see below), but this is rare. 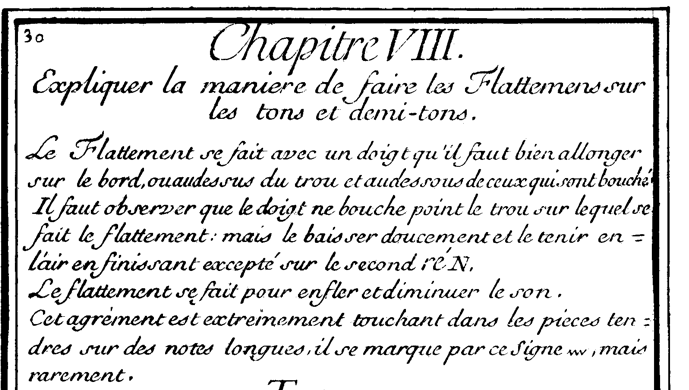 Again an explanation of the technical execution of flattements on each note is given.

The battement is a type of mordent. You hit the tone hole closest (or where you want (sic)). There is a simple and a double type. The simple you hit the hole only once, the double several times.

Again suggestions are made which holes are best for hitting.

The next chapter explains the Port de voix (appoggiatura) and Accent. The port de voix can often be found when going upwards by step and is notated with a small note (see below).

The accent is a small note at the very end of the main note. If it's not notated, you can add it on long notes when one descends by step (examples E and F below), or when the same note is repeated several times (G and H). 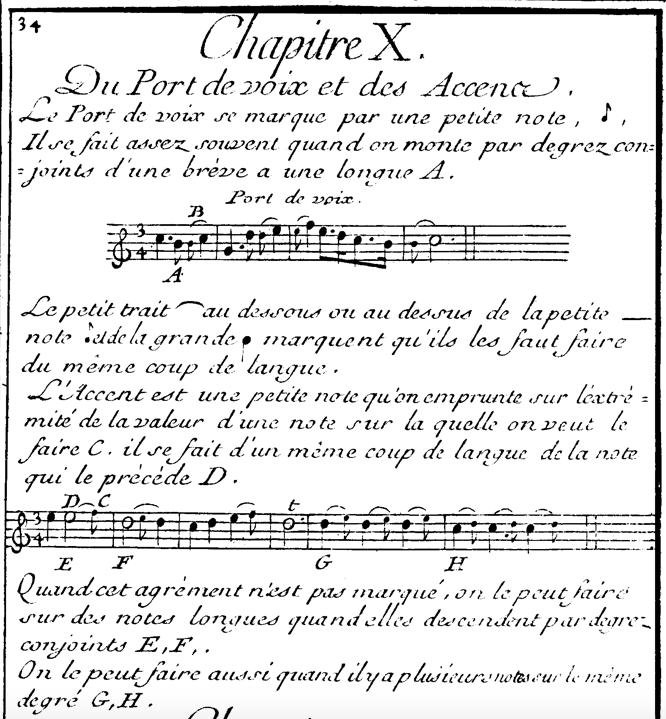 In Italian music the port de voix is usually longer, and the battement shorter and with a softer sound. 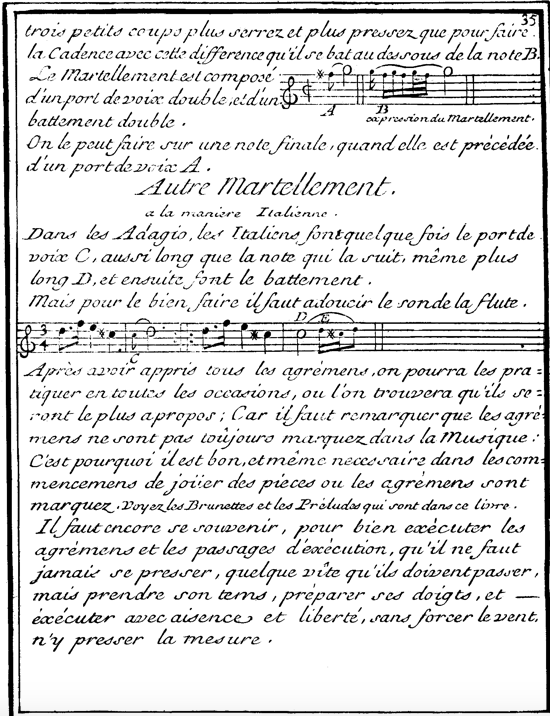 Finally Monteclair says that the ornaments are not always written into the music. That's why it's good to first start with his example pieces where they have been notated.

Practice the ornaments slowly without forcing the air or squashing the beat.