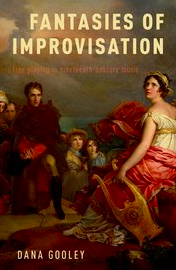 The first history of keyboard improvisation in European music in the postclassical and romantic periods, Free Play: Fantasies of Improvisation in Nineteenth-Century Music documents practices of improvisation on the piano and the organ, with a particular emphasis on free fantasies and other forms of free playing. Case studies of performers such as Abbé Vogler, J. N. Hummel, Ignaz Moscheles, Robert Schumann, Carl Loewe, and Franz Liszt describe in detail the motives, intentions, and musical styles of the nineteenth century's leading improvisers. Grounded in primary sources, the book further discusses the reception and valuation of improvisational performances by colleagues, audiences, and critics, which prompted many keyboardists to stop improvising. Author Dana Gooley argues that amidst the decline of improvisational practices in the first half of the nineteenth century there emerged a strong and influential "idea" of improvisation as an ideal or perfect performance. This idea, spawned and nourished by romanticism, preserved the aesthetic, social, and ethical values associated with improvisation, calling into question the supposed triumph of the "work."